Over recent decades our industry has been led into a situation where many of our breeds are now heavily dependent on human intervention, particularly at lambing time but also at many other times during the sheep calendar to ensure their survival and production at suitable levels, a management philosophy unsustainable in the future.

The easy care philosophy is now widely accepted within the industry as the way forward for the sheep farmer (of the future) managing much larger flocks of sheep. I believe that the ability to manage much larger flocks of sheep is an economic certainty if sheep production is going to continue in the future. However, this must be balanced against a requirement to produce what the market demands, in terms of meat yield, meat quality and increasingly, production methods.

On our own farm we have been pursuing this philosophy of sheep being able to look after themselves for the last twenty years.  We have always culled ewes which have the tendency to be persistently lame so that now we are in the situation where if a ewe does not recover completely to a single treatment or becomes lame for a second time, she is culled at the earliest opportunity, irrespective of the cause of that lameness.  This has almost completely eliminated foot rot from my flock and other causes of lameness are dramatically reduced. 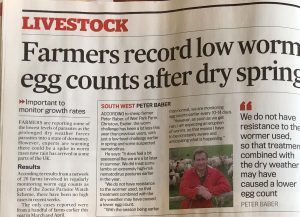 Since 2009 we regularly carry out a FEC (Faecal Egg Count) to both determine if a group of sheep need drenching and to test the efficacy of various drench groups.  We also individually sample all ram lambs intended for breeding. We have now selected lines of sheep within both our terminal sire breeds, which are showing significant resistance to internal parasites. For several years we have been part of a network of 26 farms involved in regularly monitoring worm egg counts as part of the Zoetis Parasite Watch Scheme and recently featured in an article commenting on Egg counts – Farmer’s Guardian.  For the last five years we have also been selecting rams showing resilience to worm challenges by maintaining fast growth rates and reduced levels of dagginess.

Scrapie was an insidious disease for many years, causing significant welfare problems in some sheep flocks. For the past twenty five years, long before the inception of the NSP (National Scrapie Plan) we 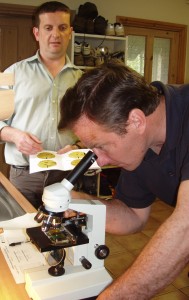 have tested all our stock rams for genetic resistance to Scrapie, and for several years all our female replacements. Our flock could now be described as almost totally resistant, but we will still continue to test all stock rams until the UK flock achieves total eradication of Scrapie.